Home » BLOG » In the News » Troubled Troops in No-Win Plight

CAMP PENDLETON, Calif. — Chris Packley returned from Fallujah in 2004 a top marksman on a sniper team showcased in the Marine Corps Times for its 22 kills.
“I was exceptionally proud of that Marine,” says Gunnery Sgt. Scott Guise, his former team leader. 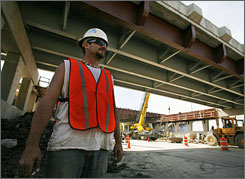 He also came home with flashbacks — memories of his friend, Lance Cpl. Michael Blake Wafford, 20, dying on the battlefield. Packley says he smoked marijuana to try to escape the images. He also left the base without permission. “I wanted out,” Packley says.

Last year he got his wish and was expelled from the Marine Corps. As a consequence, he lost access to the free counseling and medication he needed to treat the mental wounds left from combat, according to Packley, his former defense lawyer and documents from the Department of Veterans Affairs.

Scores of combat veterans like Packley are being dismissed from the Marines without the medical benefits needed to treat combat stress, says Lt. Col. Colby Vokey, who supervises the legal defense of Marines in the western USA, including here at Camp Pendleton.

When classic symptoms of post-traumatic stress disorder (PTSD) arise — including alcoholism and drug abuse — the veterans are punished for the behavior, Vokey says. Their less-than-honorable discharges can lead to a denial of VA benefits. Vokey calls it a Catch-22, referring to the no-win situation showcased in Joseph Heller’s 1961 satirical war novel Catch-22.

“The Marine Corps has created these mental health issues” in combat veterans, Vokey says, “and then we just kind of kick them out into the streets.”

Characters in Catch-22 were caught in a contradiction. They could be relieved of dangerous flying missions if crazy. But if they claimed to be crazy, they were deemed sane for trying to avoid danger and had to keep flying.

In Iraq, Marines who perform well in combat can be lauded for it. But if they develop PTSD, they can be punished for stress-related misconduct, kicked out of the military and denied treatment for their illness.

In recent months, the Marine Corps has begun investigating the matter, identifying 1,019 Marines who may fall into this group since the war in Iraq began. All served at least one year in the Marines and one tour overseas before being discharged for misconduct.

“We’re digging down into the data sources we have to try and come up with answers,” says Navy Capt. William Nash, who coordinates the Marine Corps’ combat stress programs. “That it happens at all is obviously not ideal.”

He says each case will be examined to learn whether the Marine suffered combat stress and whether that might have contributed to the misconduct.

The results could help the Marine Corps flag combat-stressed Marines and help them avoid getting into trouble, Nash says.

The military has moved more aggressively in this war to educate and treat combat stress than in previous conflicts. Mental health teams have been sent to Iraq and Afghanistan. Soldiers and Marines are asked about their mental and physical health before and after their tours.

A 2004 Army study showed that about 17% of combat troops suffer PTSD, a rate comparable with Vietnam-era stress among such troops, says Joseph Boscarino, a senior investigator with the Geisinger Center for Health Research in Danville, Pa., who has conducted extensive PTSD research on Vietnam veterans.

Vokey and his lawyers say they are convinced, based on reviews of medical records, that combat stress was a major factor in the misconduct cases. They argue that either the Pentagon or VA should revise its policies so that these combat veterans are not stripped of the medical care they need to get better.

“People would be appalled if the guy came back and he had lost a leg, lost a limb, and then we say, ‘Oh, you had a DUI (driving under the influence), so you’re going to have to give your prosthetic back,’ ” says Marine Capt. James Weirick, a former member of Vokey’s staff. “But to a great extent, we’re doing that with these people.”

Packley, 24, received an other-than-honorable discharge. According to a VA document Packley’s mother, Patricia, shared with USA TODAY, the department acknowledges he has PTSD but denied him benefits in July.

“You go to war and they can’t even help you with the problems you get from it,” says Packley, who now does state highway construction in Joliet, Ill.

He says he has been off anti-anxiety, anti-depression and sleep medications for months because he cannot afford it. “I’m just so stressed,” he says. “It doesn’t take much to get me almost panic-stricken anymore.”

Marine Capt. Mike Studenka, who supervises a law office located amid infantry battalions at Camp Pendleton, says he sees about 40 Marines each month who are in trouble. About a third fit the profile of combat veterans with impressive records who suddenly have drug or alcohol problems and face dismissal and loss of benefits.

“You have guys coming in this building who are, no question about it, heroes in everything that they have done in the past,” Studenka says. “You have them saying, ‘I just need to get out. I want out.’ That breaks your heart.”

The Marine Corps says post-traumatic stress disorder is no legal defense to misconduct and that discipline must be maintained.

“PTSD does not force anyone to do an illegal act,” Nash says. “The consequences to the Marine Corps of not upholding those standards of behavior would be a much greater tragedy. It would dishonor all those Marines who have been injured by the stress of war but who have not broken the rules.”

Marines, sailors, soldiers and airmen who get in trouble can receive one of four discharges. The lightest is a general discharge, often described as “under honorable conditions,” in which recipients remain eligible for most VA benefits.

The law prohibits a veteran from receiving the full spectrum of VA benefits — such things as health care, insurance and home loans — in certain cases, such as those involving deserters, conscientious objectors or those who receive dishonorable discharges.

But the VA has discretion to grant full benefits in other-than-honorable or bad conduct discharge cases. It can still deny them if the agency decides the underlying misconduct was “willful and persistent,” a largely subjective decision, VA official Jack McCoy says.

Statistics from 1990 through September show that about eight out of 10 veterans who received bad-conduct discharges were turned down when they sought benefits, McCoy says.

Even if the full package of benefits is denied, the VA can still grant health care for specific war-related injuries such as PTSD. Gary Baker, director of the VA’s health eligibility center, says that in his 20 years of experience he has seen this exception granted fewer than six times.

The VA offers temporary counseling, but no medication, for veterans who are appealing their discharges. Counseling ends if the appeal fails. Vokey argues that the VA could relax its practices and treat veterans who are discharged for PTSD-related misconduct.

Mental health experts say this problem almost certainly occurred in prior wars. But combat-induced mental disorders and how they may contribute to bad behavior were not as well understood.

The issue exists today in the Army but to a lesser degree, says Army Lt. Col. John Wells, a former supervising defense lawyer. Combat-stress cases involving misconduct are handled in informal ways that often do not lead to a loss of benefits, Wells says.

The Marine Corps, by comparison, prides itself on its strict standards.

“We take discipline infraction very seriously,” says Lt. Col. Scott Fazekas, a Marine Corps spokesman. It prosecutes about the same number of troops as the Army each year for misconduct, though it is only one-third the Army’s size.

The Marine Corps also does a disproportionate share of fighting and dying in Iraq, making up 20% of U.S. ground forces while suffering 30% of the casualties. More than 10% of American troops who died in Iraq were Marines from Camp Pendleton, which has lost almost 300, more than any other military base.

Although Marine Corps officials say the service has come a long way in recognizing and treating PTSD, they acknowledge that it still struggles to provide treatment resources and to overcome the stigma against those who suffer mental health problems.

“There might be some commanders out there who aren’t really willing to accept that there is such a thing as post-traumatic stress syndrome,” says Marine Col. Hank Donegan, a military intelligence officer at Pendleton.

Vokey and his staff agree that many troubled Marines should leave the Marine Corps, for their sake and that of the Corps. To strip them of benefits is wrong, they say. “It seems to me our country has bought that problem and we ought to fix it as best we can,” says Melissa Epstein, a Los Angeles lawyer and former Marine captain on Vokey’s staff.

One of those PTSD cases involved Ryan Birrell, 24, who served as a sergeant with the 1st Battalion, 7th Marine Regiment. After his second tour, in 2004-05, he received the Bronze Star with a “V” for combat heroism.

The citation described five separate episodes of valor, including one morning in February 2005 when Birrell organized the defense of a fog-shrouded observation post in Husaybah that came under multiple attacks by insurgents and suicide car-bombers. A wounded Birrell rallied his troops, tended to casualties and directed fire, often while exposed to enemy gunfire.

“Sgt. Birrell reflected great credit upon himself and upheld the highest tradition of the Marine Corps,” his citation reads.

After coming home, Birrell took an assignment earlier this year as a drill instructor at the Marine Corps Recruit Depot in San Diego, and his life began to fall apart.

Diagnosed with PTSD, he suddenly demanded a divorce from his wife, abused alcohol and methamphetamine and left his base without permission, say Birrell and Weirick, then his lawyer.

Kicked out of the Marine Corps with an other-than-honorable discharge, he lived in Tijuana, Mexico, for months, often homeless.

“What brought me down there was how the streets were kind of like being in Iraq — that kind of turmoil-type stuff,” Birrell says now.

Birrell says that in Tijuana, he could fill his head with thoughts of where to find food or shelter.

Growing tired of that life, he finally called his parents and they brought him to their home in Las Vegas last month. “Life is great,” says his mother, Kim Lukas, who says she’s ecstatic to have him home again.

For Birrell, who now lives in Torrance, Calif., insomnia is back. “When I do sleep,” he says, “I’m constantly waking up from dreams, constantly tired throughout the day.” His nightmares are of war. He visited VA offices Tuesday asking for benefits despite his other-than-honorable discharge. Birrell says he needs treatment for his PTSD. Weirick fears they will turn him down regardless of his battlefield heroism.

Lukas says that makes her angry. “He’s done two tours over there, and God knows how many lives he’s saved,” she says. “He’s going to need the care.”