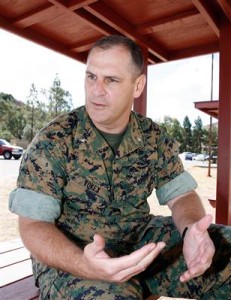 Mr. Vokey is one of the most well known and prominent military lawyers in the world. He has earned a national reputation as a hard-nosed, zealous criminal defense trial attorney. A retired Lieutenant Colonel from the United States Marine Corps, he has been involved in some of the most highly publicized military cases this century. He served as the lead counsel for a Canadian teenager detained in Guantanamo Bay, Cuba and held for trial by a military commission on murder and terrorism charges. Mr. Vokey also defended the Marine squad leader accused of killing 18 people in the now infamous city of Haditha, Iraq.

Mr. Vokey served his country as a Marine Corps officer for over 20 years. He first served as an artillery officer, to include a combat tour during the first Persian Gulf War. Mr. Vokey also handled a variety of critical jobs involving sensitive or classified information. He was then selected for the highly competitive military law program. After graduating with distinction from law school, where he was also honored with selection to the Order of the Barristers, Mr. Vokey began a career as a trial lawyer. With the exception of one year spent obtaining his Masters of Law, he spent all of his time as a military judge advocate in the courtroom as either a prosecutor or defense attorney.

Mr. Vokey has tried hundreds of cases as both a prosecutor and defense counsel. As chief prosecutor for the busiest trial team in all of the Department of Defense at Camp Pendleton, California, he supervised or tried hundreds of cases. Not the one to sit on the sidelines, Mr. Vokey served as lead prosecutor for many cases to include murder, drug distribution, rape and a highly publicized bank fraud case involving the attempted theft of millions of dollars from the Federal Reserve. Mr. Vokey often worked closely with law enforcement organizations such as NCIS, FBI and military investigators during both the investigation and trial stages. As a result of his performance, he was awarded the Meritorious Service Medal by the Secretary of the Navy.

As a defense attorney, Mr. Vokey earned the reputation as an aggressive and tough advocate for his clients, both military and civilian. As the Chief of all Marine Corps defense counsel in the Western half of the United States and in Iraq, he was responsible for the defense of service members charged with a variety of crimes. Many of those cases would come out of combat actions in Iraq and Afghanistan and included numerous cases of war crimes cases against U.S. service members. Mr. Vokey personally defended numerous clients, to include those charged with murder, manslaughter, rape, sexual assault, sexual harassment, kidnapping, alcohol and drug related offenses, unauthorized absense (AWOL), orders violations, and false official statement. He constantly fought for the rights of accused servicemembers, in and out of the courtroom. Observing our men and women returning from multiple combat tours in Iraq and Afghanistan, Mr. Vokey noticed that many were suffering from post traumatic stress, combat stress, or other mental health issues. As explained in an interview with USA Today, Mr. Vokey became a strong supporter of the rights of service members who returned from combat with a variety of mental health disorders only to find themselves being kicked out of the service.

Mr. Vokey has continued representing service members in the most difficult and, sometimes, notorious cases.  He has represented at trial more service members charged with war crimes and crimes originating in a combat zone than any other attorney in the country.  Mr. Vokey has also handled a great number of sexual assault cases over the years.  In the last three years, after the military focused on prosecuting such cases, Mr. Vokey has won trial after trial involving sexual assault, rape and similar offenses.  His zealous and dogged representation of his clients is noticeable no matter the type of case, no matter the location of the court.

After retiring from the Marine Corps in 2008, Mr. Vokey joined the prestigious Dallas criminal law firm of Fitzpatrick Hagood Smith & Uhl LLP, where he was made a Partner.  Adding to his military and criminal justice experience, he then worked at a civil law firm, representing injured persons in personal injury cases.  No matter the type of case – military, criminal or civil – Mr. Vokey brings to the courtroom a wealth of trial experience and an expertise. His trial record and reputation along with his impeccable qualifications and solid work ethic put him among the very best in the representation of injured persons and servicemembers, citizens and businesses that find themselves subject to investigation and prosecution in criminal matters.

Additionally, Mr. Vokey has served as an expert witness and consultant in military matters for both state and federal cases. His wide and varied experiences qualify him to provide expert opinion, advice and testimonial in: general military matters; strategy, tactics and operations; military administration; military benefits, separation and retirement; criminal law; military law; and government contracting and ethics.